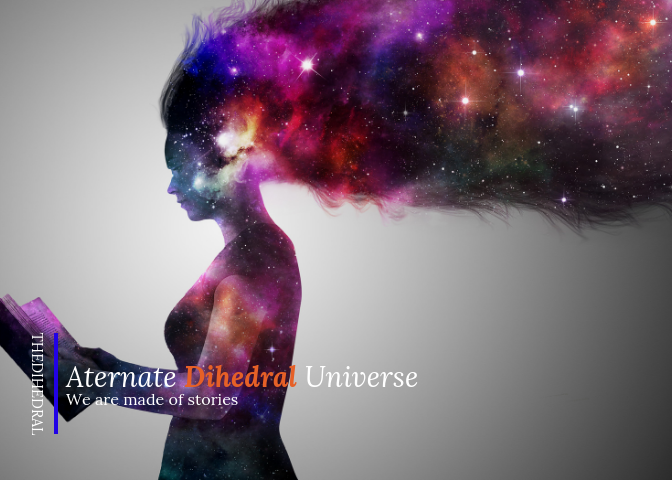 What if we had lives parallel to the ones we already have? Sometimes I like to think that there are different Gaias living different lives in different universes, guided by the different choices in life that I’ve ever had. I once wanted to pursue acting, what if there is a Gaia acting her heart out? One in another dimension? Well… Because I don’t know and have  no control over that, I challenged the crew to create their own alternate DIHEDRAL reality!

Be prepared to read the Alternate Dihedral Universe, from the creative minds that brought you theDIHEDRAL

For some reason, I fantasize of High-Clip being a world class snowboarder! Why? I am not sure. But I am sure that somewhere out there she is crushing the slopes and throwing some fancy moves, nailing perfect scores across the board. High-Clip’s fierce aura and athleticism makes her the perfect fit for an elite athlete in any reality, because in this one she is already a swimmer, climber, and basketball player, I decided to throw her out of her comfort zone (who knows, perhaps she is already a mad snow queen) and turn her into the Shaun White of theDIHEDRAL. Bright aqua jacket with orange pants, a board that reads “Melting,” Ladies and Gentlemen, I introduce you High-Ollie

The beard, there is something about the beard. I don’t know if it is mere stereotype or what, but in an alternate reality Carrot is an alpinist. The one that carries his tools in his beard, Carrot needs no assistance. When he summited Everest, he was all by himself; sherpas got nothing on him. One day he had completely ran out of food supplies, his pack was empty and his stomach rumbling. In a situation where a non-legendary would have perished, Carrot pulls a carrot out of his beard and moves on. That is the power of this man’s beard and the frightening beauty of alpinism.

I know that Casen is already a runner, but probably because of this I envision him as an elite trail-runner? I am talking about the Kilian Jornet type. A runner that crushes every mile and has the endurance of a horse. Casen’s lean body and style begs for recognition. He reminds me of the people I used to train with and run against. In this reality, he runs so fast yet he administers his stamina so well no one can compare. Kilian and him rub shoulders to the point where they decided to team up and compete together. From El Cruce Columbia to Trial du Montblanc, this dream team dominates. K+C

When Gaia originally laid out this week’s topic, I immediately put a restriction on my options.  I didn’t want to replace climbing with an activity that the others already do, e.g. Casen already runs, so I’m not going to make him a runner, High-Clip already swims, so she will not be a swimmer, and Gaia already pushes her limits with ultras, so no high-altitude multi-marathons for her.  In addition to coming up with an activity that’s original for each person, I also wanted to try and find something that fit their distinct personalities. Without further ado, here are my altHEDRAL all-stars!

I envision High-Clip messing around with leptons and bosons by night, and strapping into a kiteboard harness by day.  What better way for a theoretical physicist to spend their morning, than mixing her particles with the waves? Kiteboarding will offer High-Clip the ability to gain altitude, work in a harness, and reach for the stars.  High-Clip pullin’ off kiteloops while nucking off-shore in the power-zone… all while writing about her adventures in theSKYHEDRAL!

While theDIHEDRAL typically nibbles around the fringes of climbing, in Gaia’s alternative universe our readers would be treated to tales of life on the trail…the snow trail!  Blazing trails through the leafless trees while covered head to toe in winter gear on a snowmobile takes courage, patience, and a keen sense of what one wants out of life. Plus, standing up and pulling off the helmet to take a peek at the isolated tundra in the dead of winter is just cool!  Gaia runnin’ sled, tits deep in some gnar pow on a bluebird day…yeah our Venezuelan Sol, is turning Ice Queen!

Have you ever heard of Flutag?  If not take a look here.  I would like to welcome you to Casen’s Plan B.  When you mix puzzle solving, adrenaline, fun, and insanity, you get a recipe for Casen.  Toss in a dash of flying, a pinch of sinking, and some utter ridiculousness, you get Flutag.  I can see it now…Casen pushing a 10 meter 150 kilo guitar with wings made out of duct tape and cardboard boxes down a pier into Galveston Bay.  His tales of adventure adorned in Red Bull flare would be sure to entertain for lifetimes to come! Lass uns das machen!!!

Trying to imagine all of us without climbing is at first a bit daunting and scary (I mean, climbing is #1), but then I realized that there are so many other activities for us to learn! Maybe there is more to life than climbing, but I guess we’d have to try living in our alternate universes to find out!

Carrot always has tons of things going on at once, but I think in his alternate life he’d have a change of pace. Having devoted his life to philosophy, alt-Carrot spends his days at his lake house in New England observing nature and writing about all that is revealed to him. He relaxes by pulling out his fishing rod and waiting for some unlucky little fish to be fooled by the bait worm. Since his intelligence radiates outward, the fish seem to be uninterested by alt-Carrot’s fishing rod, but fret not, alt-Carrot is not bothered in the slightest. He doesn’t mind waiting, and in fact enjoys it, so that he can read and read and read and read even more…just reading until he becomes the transparent eyeball…and an expert fisherman.

Behind a wall of flames and the stinging smell of sizzling onions, you’ll find alt-Casen cooking the tastiest plate you could ever imagine. With the tallest chef’s hat in all the land, in this alternate universe alt-Casen has risen to the top of the ranks in the chef world. Known internationally, alt-Casen travels around the world from kitchen to kitchen, learning new flavors and adding his own spice to every dish. Never missing a beat, alt-Casen works every day on compiling a master cookbook containing everything all of the culinary art that he has witnessed and partaken in around the world. Not to be outdone, alt-Casen records video masterpieces in every country in which he cooks in order to provide us common folk with a tutorial on how to cook every cuisine Casen-style (the best style, one could argue).

Gaia must truly be an Ice Queen, as Carrot says, because the way I see it, alt-Gaia was BORN for the ice. She skates faster, hits the puck stronger, checks people harder, and fights longer than anyone else in the rink. Outside of the stadium, alt-Gaia is the sweetest, kindest, most generous human being on the planet. The minute she laces up her frigid skates, alt-Gaia becomes the fiercest, meanest, most merciless ice hockey player you’ll ever meet (or wish you hadn’t, if you’re the opponent). Even after her team wins (likely by a landslide), alt-Gaia has such good sportsmanship that the other team hardly remembers they lost at all; only that they had the most magnificent hockey game with the most magnificent hockey player: alt-Gaia.

Hight Clip is definitely the fiercest climber I know. In our alt-universe she is the fiercest armwrestler in the land. Grown-men weep at the sight of her right bicep. She conquered the world arm wrestling championship for 8 years in a row, but was eventually brought to a halt by league politics and sexism.

Before alt-High Clip, there was no division between men and women’s arm wrestling. After her 8th consecutive victory, some steroid-infused sexists decided that the league would be better off if men and women wrestled separately. High Clip’s love for the purity of the sport made her feel she was better off having wrestled her last arm. After they changed the rules she took up her second passion, breaking the one-armed pullup record. Look at her from the left side, she almost looks like a normal human. Look at her from the right side and she looks like she could snap your neck like a twig. She spends the rest of her days flexing her right arm in the mirror and doing one armed push-ups.

Like the name implies, alt-Carrot’s life has a lot to do with Carrots. In fact, he has one for a nose. In our alt-universe he lives his life as a snowman in the north pole. For the first 18 years of his fragile life he was without the ability to move. Basically, he did a lot of standing and thinking. This is where he fostered his love for philosophy. Socrates eat your heart out.

Finally, on his 18th birthday, his life was changed forever. An elf gifted him a top-hat that would’ve made Abraham Lincoln roll over in his grave. The hat had magical powers that allowed him to walk, talk, and sing badly. From that day on alt-Carrot vowed that his life would not be wasted. He took to reading every book he could get his hands on, and taught elves all of his readings and philosophies.

It was only when the elves revolted against their slavelord Santa, went on strike, and demanded higher wages and ‘equal treatment’ that Carrot realized he may have made a mistake. He was forced to escape from the North Pole and head to northern Alaska. He spends the rest of his days writing books and flinching at the sound of distant jingling sleigh bells.

Alt-Gaia is an excellent shoemaker of the Dassler Brother Shoe Factory in Germany. From humble beginnings she rose up to be an executive in the company, that is, until it split in 1949. The result was the creation of two power-house shoe companies: Puma and Adidas. Alt-Gaia had a decision to make. The rest of her family had chosen to work for Puma, however, Adidas had promised her a higher-ranked position if she were to join them. Dead-set on her success, alt-Gaia joined Adidas and helped make it the powerhouse shoe supplier that it is today.

After a few years of working for Adidas, the day to day executive business decisions began to break her down. She longed for her past life; making shoes and spending time with her family. So she did the unthinkable.

Exactly three years after the company split, alt-Gaia walked confidently out the doors of her factory and strolled through center town to her old family home. All the people gasped as they looked down at her feet. On the right, an Adidas shoe. On the left, a Puma. Alt-Gaia walked undisturbed by the commotion on a beeline for her family. They welcomed her back home with open hearts and many hugs. She spends the rest of her days there, making shoes and spending time with her loved ones.

You could say her ‘sole’ purpose is to make shoes…

Have you ever pondered upon the existence of a parallel universe? How would that reality be like?