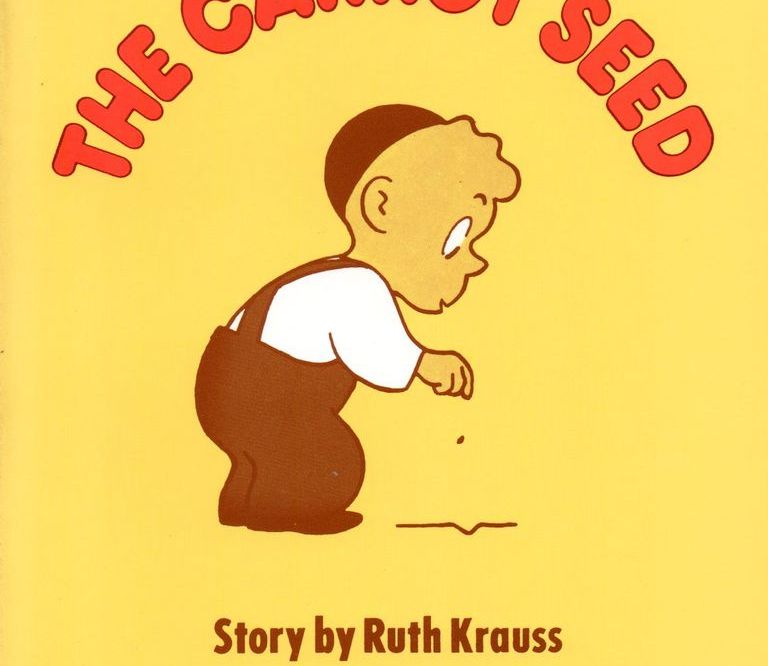 ***This is an adaptation of a recent speech I gave based on the classic children’s book The Carrot Seed by Ruth Krauss.***

THE CARROT SEED by Ruth Krauss1

His Mother said, “I’m afraid it won’t come up”.

His Father said, “I’m afraid it won’t come up”.

His big brother said, “It won’t come up”.

Everyday the little boy pulled the weeds around the seed and sprinkled the ground with water.

But nothing came up.

And nothing came up.

Everyone kept saying it wouldn’t come up.

But he still pulled up the weeds around it every day and sprinkled the ground with water.

And then, one day,

A carrot came up.

Just as the little boy had known2 it would.

This seems like a simple book, but I wanted to make sure my interpretation wasn’t way off base…

So, I looked at a couple of book reviews to see if the way I interpreted it was what others thought…it turns out it’s not.  Let me show you some of these reviews.

–  If this is a “how to” book about gardening, then I am way off…Let’s see if the next review picks up on any subtle metaphors?

–  Yep, strike 2! I’m beginning to feel like I’m the one who missed the point?

– Yeah, so I never imagined this was actually a book about growing carrots, I saw the entire thing as a metaphor for believing in yourself…

I didn’t look at this story in terms of gardening at all, let me give you my interpretation, which is clearly wrong, but if a little boy can grow a carrot in a suspect patch of dirt and a giant shovel, perhaps I can gleam something useful from this literary gardening masterpiece.

My take is: even when people doubt you, sometimes it pays to believe in yourself, even if it means disagreeing with those who are close to you.

Apparently, when I was little, I missed the point on gardening completely, but this book was everything to me when I was young, I loved this little epistemological jewel.

Growing up I could relate to this boy everyday of my life.  I grew up in a rough neighborhood, which wasn’t so much on the wrong side of the tracks as much as it was directly on the tracks.  People had pretty low expectations of me and my friends and for the most part they were right.  I was really good at school, and always thought I could go to college, but most people around me just kind of scoffed.  My neighborhood was a blue collar Detroit neighborhood, and working in the auto industry is pretty much what was expected of everyone…if you made it that far.  Most of us didn’t.  But I always believed I had a ‘carrot’ that would grow.  The majority of my friends weren’t so lucky.  My best friend died of alcohol poisoning at a very young age, for another friend it was a self inflicted shotgun blast because the bullying pushed him too far, another ended up in prison for armed robbery, another is just a stat in the opioid epidemic, my friend Tammy though, she had all the tools to do anything she set her mind to.  Her and I were really good friends, we made it through High School and actually got into college together; we literally beat the odds, despite suffering some pretty sad losses along the way.

We were pretty competitive with grades, maybe I was a little bit better?  Just joking, I was a lot better.  Just joking again, she was better.  It didn’t really matter who was better, because we both worked hard to overcome the odds, and we both made it. We both actually made it into college.  We used to study at a coffee house together nearly every day, and so the day that she didn’t show up I knew something was wrong.  She was 19 when she OD’d on heroin in the back of her bosses van.

I began to wonder if I would ever get a chance to stop watering, to stop tending, and to stop pulling weeds?  And I realize the answer to that question is no!  Because life isn’t about just one carrot, life is a string of carrots…each just as beneficial to a complete life as the last.  When I got my first teaching job…at the end of my first semester, a student came up to me, shook my hand, and thanked me.  I never expected that to be a thing, and I can’t explain how surreal it felt to have someone thank me for doing something that so many people doubted would ever happen. He thanked me for believing in him, for pushing him to see things a little differently.  For a minute I thought wow…this is my carrot, all the doubters and haters who never thought this carrot would grow were wrong, and it felt amazing.

That student signed up to take another class with me the following semester, it would only be a couple weeks before his mom called to tell me that he wouldn’t be coming back to class, because he had OD’d, she mentioned that I was his favorite teacher, and thought I should know… I just wanted to give up!

The very next day, I was headed to my nieces 1st birthday party, I stopped in a bookstore to grab her a present and I bought her a copy of The Carrot Seed.  As I read it to her for the 1st time, I was reminded of the little boys perseverance.

And the next day, I faced new barriers, it felt like I had to start all over again, watering, and tending and pulling weeds. In reality we are constantly starting over again, because there are always new obstacles, and new opportunities and new goals.  Part of life is that there will always be new doubters as well, but if for one second we give in, that’s the moment our carrots stop growing.

Throughout life we get a chance to grow numerous carrots, and throughout life we encounter numerous doubters, but if we remember to keep watering, and tending, and pulling the weeds then perhaps all the struggles will be worthwhile, and most importantly, no matter what anyone else believes, you gotta keep believing in yourself!

BUT hey…maybe the book really is just about how to grow a carrot?

47 Replies to “The Carrot Seed”