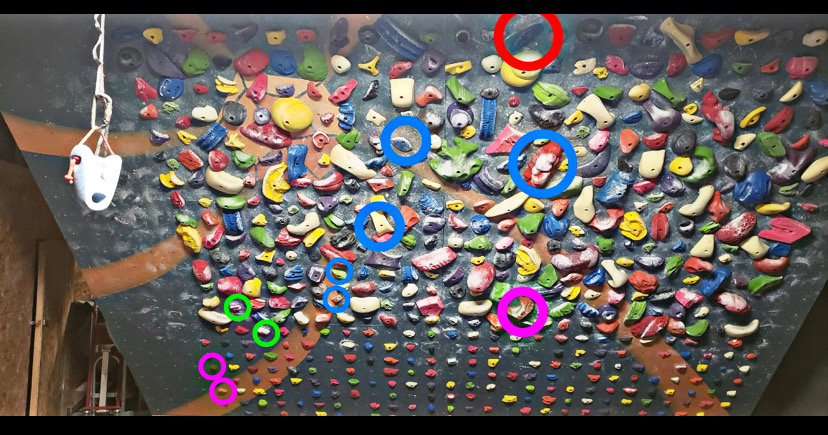 There is a place that all climbers know about, but most are quick to avoid. You see a lot of team kids going hard there, but I tended to treat it as empty wall space, it might as well have been storage, an old broom closet, or an ’employees only’ lounge because I had no reason to visit that wall. Surprisingly I’m not talking about the speed wall. The speed wall might as well be extra storage space as far as I’m concerned. But don’t @ me speed wall warriors, you guys are precious, I think it’s so cute when you move up that wall with your super fast shoes at super fast speeds, it’s just not for climbers me.

The spot I’m talking about is the spray wall. For those of you who don’t know what a spray wall is, let me explain. It’s usually a wall set at something around a 45 degree angle. Setters will then “spray” the wall with a variety of holds in all different sizes, textures, shapes, and colors. A proper spray wall looks like a giant muppet vomited bits of plastic rainbow pieces before sneezing white powder and black rubber all over the place.

Spray walls come in all shapes and sizes, they house the easiest arrangement of holds for home walls and outdoor training. If swole is the goal, then the spray wall is the way to get there. They’re also great places to over-extend tendons, to rip off callouses aka flappers, and to destroy fingertips. Until recently I just wasn’t interested. All forms of rock climbing have their ups and downs ( I swear this was not an intended pun – I wouldn’t do that to you), but I like to climb because it’s fun, and spray walls have always just seemed like they were reserved for the most sadistic among us.

A climbing pal gave me some spray wall pointers, namely that spray walls are fun. Aaaaand that is basically all it took. Spray walls are fun. You aren’t bound by the a particular route that has to be completed in one particular fashion, muppet regurgitate offers untold possibilities. Of course like most aspects of climbing (maybe most aspects of life), it’s even better when you’re surrounded by a supportive group of friends cheering you on, but projecting solo has its benefits as well.

Yeah the sufferfest is lively and I fall on nearly everything I attempt, I look and feel like a fool in front of the strongest climbers I know, but that’s fun. Right? RIGHT? It’s fun…I’m pretty sure it’s fun? It is…debatable! Okay it’s fun! But if you don’t believe me, you gotta check out a spray wall app called Eat, Spray, Love. This app allows you to post photos of routes that you put up, so that your friends can work them too. You just put digital circles around the holds that you want to include in a route, and before you know it, the whole crew/gym/world/usually it’s just me, has a new project to work.

So, I’ve been falling a LOT, and my fingertips feel like John Doe’s from the movie Se7en…but I’m pretty sure I’m having fun!? My eyes have been opened. Who knows, maybe speed climbing is next?

***Editor’s Note: Speed Climbing is not next!