For all the climbing books and articles that are circulating among climbers, I was shocked at how little is actually known about Popo and Nana.

If it weren’t for the common stories, artifacts, and astute reverence that other climbers have for this duo, I’m not sure I would believe they even exist/existed.

So what do we know about Popo and Nana? They were fearless, they climbed as one, and they influenced a whole hell of a lot of people. The first known mention of this dynamic dyad comes from Harry Tyndale (climbing partner of George Mallory) when he recalls, “George and I were practicing some high altitude breathing techniques, when out of nowhere comes these two climbers, no ropes, no oxygen, and almost no gear, they each had a hammer and that’s it. I know we were at a pretty high altitude and so I may be misrepresenting the situation, but it looked as thought they hopped right by us, and as they passed, Popo looked back with a glance and a smile, it was seeing that magnificent smile that let me know that life…well, life is good”.

Nearly every other climber I’ve talked to shared a very similar story.

Aside from that fated hammer and that majestic smile, what else can I say about this tight knit team? Well, we know that they love climbing as a pair, but each has been spotted climbing alone as well. They’ve only been known to free solo, carrying with them just a single piece of gear (the hammer). Their preferred climbing style is to dyno when possible. They time themselves as they approach any summit or top-out (it’s said that speed-climbing is an ode to their timed final pushes to the summit). They’re vegetarians and promote a vegetarian lifestyle; both Popo and Nana are strong advocates of mountain sustainability. When we finally got a hold of Yvon Chouinard1; initially to ask him about some of his early influences, like Harry Tyndale he immediately went right to talking about the “bouncing twosome” when he says, “Tommy, Chuck, Royal, and I were working on the first ascent of The North American Wall over in Yosemite (using no fixed ropes), when out of the blue these two hopping hobbits, literally bounced right over us, no ropes, no gear, just a couple of wooden mallets, an eggplant, and the most inviting smile I have ever seen. We’d been struggling for hours on a single crux move, we hadn’t packed sufficient food for the climb and we were getting hangry. As Popo and Nana bounced by, I think it was Chuck who yelled out ‘what’s with the eggplant?’ Popo just nodded peacefully, tossed us some fresh veggies from his parka, and carried on as if that was somehow a normal interaction. I never told anyone this before, but when we made it to the top, there were eight fresh eggplants just waiting there for us. It was in that spirit of giving back that I realized what I wanted my company to be, and that was the beginning of Patagonia (clothing), and also the reason why so many of our clothes are purple.”

32…that’s the number of mountain peaks they’ve summited on record, though there are some who say that number is actually 48. Those are just the verified ascents; some speculate that their total number of Mountain sends is over 100. To put into perspective how spectacular that is, the next closest number of ascents by a climber is 21.

“The reason I free solo is because of them,” says famed climber Alex Honnold. Honnold goes on to add that in addition to them being his most significant climbing inspiration he actually had an brief interaction with Popo and Nana. Honnold was free soloing up in Yosemite, when he noticed that he was sharing a ledge with the legendary climbers of yore. “I couldn’t believe it was them” Honnold declared, “they were just sitting there, sharing the freshest looking cucumber I have ever seen, of course I heard the stories, but never did I expect to actually see my idols, but as I sit here now, they were there right next to me, no rope, no gear, noting except that renowned hammer, and that splendid cucumber. I know they have the tendency to vanish with a smile and dyno their way to the summit, but I couldn’t let them leave without saying something, and so I asked ‘what’s with the hammer?’ Just as I asked, a topi (rare mountain varmint that can be very dangerous to climbers) came wobbling toward us, Nana takes out that illustrious hammer, and conked it on the head, not hard enough to harm him, just enough to let him know ‘this ledge is occupied’, and just like that the topi wobbled off. As I watched the topi scanter away, I turned around to thank Nana, but they were gone, and in their place was a single cucumber”.

While nearly every climber we interviewed had a similar story of his or her own, only one climber was actually able to witness the combo of Popo and Nana hitting a summit, that lucky witness was professional climber extraordinaire Lynn Hill. Lynn explains; “I was climbing in The Gunks, this particular day I had set up anchors and was working a repel system solo, I was famished, so I decided to take a little nap in what looked like a small topi cave. I was maybe about 30 meters from the top, when I heard what sounded like an angel whispering, as I opened my eyelids to see what was happening, I saw them…Popo and Nana, right before my eyes. Nana had set up a timer which started counting down from 40, and these two magicians of mountaineering start to dyno their way up the final stretch, each with their hammer in their left hand, and harvesting fresh eggplants on their way up with their right hand. They make the summit with 10 seconds to spare when all of a sudden a giant condor flies by. Popo and Nana make one more leap and were carried away by that amazing bird. I didn’t think they saw me, but as I put my hand over my brow to block the sun and get one last glance at the greatest rock climbers the world has ever known, Popo shot me that noble and legendary smile, while Nana tossed me an eggplant so fresh I could see my reflection in it. Just like that…Popo, Nana, and that regal condor were gone. That night I looked at myself in the eggplant, and said ‘tomorrow you get the on-sight first ascent of Vandals’ (a difficult climb that had never been done), and you know what? The next day I did it! If it wasn’t for Popo and Nana, I’d still be in that topi cave sleeping. Thanks Popo and Nana, wherever you are.” 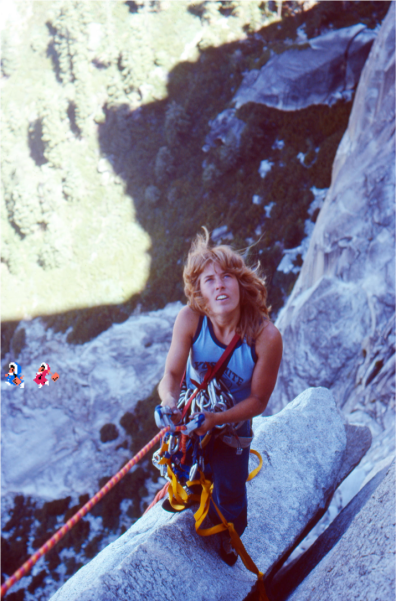 I’ve heard story after story just like these from nearly every famous climber you could imagine, from alpinists to boulderers, and they all had one thing in common…Popo and Nana are the BEST!

Their legend needed to be told, and I’m proud that I was here to tell it. I’m not sure I’ll ever get a chance to meet Popo and Nana, but if I do, you better believe the 1st thing I ask them will be… “So…who inspired you?”

“It is as if I were friends with Popo and Nana and I’m in awe of their inconceivable feats! In fact when I ice climb I dress exactly like Nana, I have even fashioned my ice axe after her mighty hammer” – Sasha DiGiulian